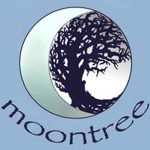 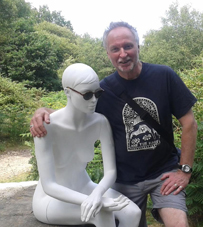 David was born in London and brought up in the Sussex Downland, in Lewes. After studying at Durham University (St. Cuthbert’s Society) and the College of St. Matthias, Bristol, David spent 27 years in full-time teaching in Cornwall and Kent, and was for 15 years Head of Modern Languages at Aylesford School near Maidstone. In 1999, David “jumped without a parachute”, moved to the New Forest area, and took the risk of trying to make a living from art and craft, backed up by some supply teaching and various part-time jobs. Currently, David still occasionally coaches private pupils in French.

Since about 1980, in off-duty moments, David has produced hand-stitched, made-to-measure, leather footwear. Together with his wife Deborah (a hand-loom weaver at the time) he was a founder and director of “Cornish Enterprises Ltd.”, and helped to run the company’s craft shop in Falmouth. The need to have a good quality catalogue for both shoes and woven goods led to the purchase of a decent camera, an interest in photography and, eventually, to a monochrome darkroom. This, in turn, led to exploration of other ways of creating images, such as block printing, and then, with the advent of computers and photo-quality printers, to digital inkjet prints.

Photography is a major tool in David’s work. The original photo may be manipulated, combined with others, or altered to produce a finished image or to become part of a 3D piece. Combining photography with other mediums (pastels, gold and silver leaf, pressed flowers, driftwood, found objects, etc.) enables David to explore themes loosely linked to the inter-relatedness of mankind and nature, and influenced by ancient spirituality. David often incorporates words, from his own poems, into his work as a complement, or a contrast, to the imagery.

David is one of the founder members of Folk Theatre Company “Rabble”, based in Kent. He has been involved as a performer for many years with street theatre, mumming plays and traditional English music and dance. This, too, is an influence on his work, both written and visual.

In 2007, David and Deborah opened The Moontree Gallery in Boscombe, Dorset. The gallery showed their own work and that of many other artists until it closed in October 2012. 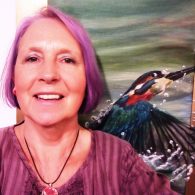 Deborah’s paintings are often an exploration of a personal mythology focusing on ancient, nature-based spirituality. She frequently includes symbolic creatures and shapes in her work and, in recent years, some of her work has taken on a more visionary, mystical nature.  Deborah works mainly in acrylics or oils and has recently been experimenting with mixed media and other mediums.

Recent paintings have been inspired by, and incorporate, some of her husband David’s poetry.

Deborah studied briefly at Eastbourne School of Art in the late sixties and then took a four-year, double Honours Degree in Art and Professional Education at Canterbury Christchurch College, in the early nineties.

In the distant past she worked as a hand-loom weaver, and has also illustrated a book, “The Wheel of the Wiccan Year” by Gail Duff, published in 2002 by Rider Books.

She was a Primary teacher for many years and taught Art at secondary level both in Kent and Hampshire.  Deborah has also organised a wide variety of art and craft workshops with both children and adults.