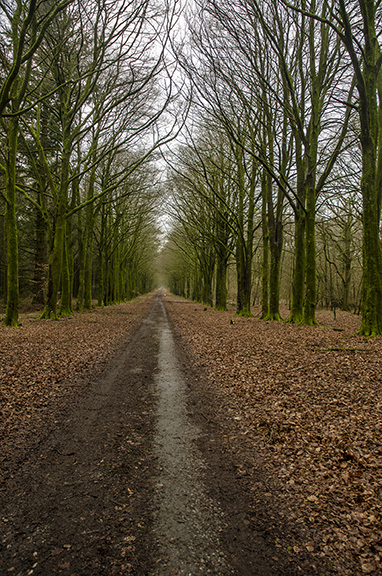 The avenue of tall winter beeches takes your eye on to a vanishing point. The stony track runs straight and empty through the tired russet and moss colours of the February wood. On either side, the trees step back into gloom beneath close-planted conifers.

The sky is low and grey. There is no wind. The trees stand motionless and silent, patient, waiting. You can feel a veil of quietness hanging from sky to tree to muddy ground. Scatters of birdsong tumble from high branches, twitching the veil.

This track remembers footfalls, cart wheels, the clump of hooves, the tread of legions. This a long memory. Before the work-gangs of the legions broke stone for foundations, raised the camber, this track was already ancient beyond the count of men. The distant ancestors of these trees would have watched impassively as bands of hunters with their flint-tipped spears moved warily along the ridgeway, looking for food, for shelter.

Just inside the treeline are three old, spreading beech trees, their limbs winter-dark and bare. The largest one has offerings hanging from its branches and wedged into cracks in the bark of its thick trunk. There are coloured ribbons, Brighid’s crosses, mobiles made of woven twigs, pieces of jewellery. These may be from recent celebrations of Imbolc, or memories of a darker story.

Almost 300 years ago, it is said, four Danish sisters came to live in Wilton, in the river valley below the eastern end of the ridge. Shortly after, an outbreak of smallpox devastated the town. The sisters, being foreign, were blamed, accused of witchcraft and murdered in the woods by the old track. They were buried separately, so that they could no longer conspire together, and trees grew from their graves. One has since fallen.

We stand on the trackway in the tangible hush of the wood, talking quietly, taking photographs. There is a sudden noise, a sharp, almost metallic, bang. It seems to come from high in the trees, not more than a hundred feet away; not the flat bang of a shotgun, nor the sharp crack of a rifle. Too loud, too brief to be a woodpecker. We turn towards the noise, peer into the denser woods beyond the old beeches. Nothing. Silence.

We turn away. Then, a burst of muffled speech, like a snatch of conversation heard in passing through a crowd. It seems both nearby and distant, none of the words distinct. It appears so close to me that I instinctively turn and step back towards the edge of the track, thinking that it must be cyclists moving fast towards us as no walkers could have approached without being seen. There is no-one. The track is empty, the woods are still and silent.